Since the first polymers were discovered, scientists have debated their structures. Before Hermann Staudinger published the brilliant concept of macromolecules, polymer properties were generally believed to be based on the colloidal aggregation of small particles or molecules. From 1920 onwards, polymers and macromolecules are synonymous with each other; i.e. materials made by many covalent bonds connecting monomers in 2 or 3 dimensions. Although supramolecular interactions between macromolecular chains are evidently important, e.g. in nylons, it was unheard of to proposing polymeric materials based on the interaction of small molecules. Breakthroughs in supramolecular chemistry, however, showed that polymer materials can be made by small molecules using strong directional secondary interactions; the field of supramolecular polymers emerged. In a way, we have come full circle.

In the Israel Journal of Chemistry (Isr. J. Chem. 2020, 60, 33 –47), Takuzo Aida and Bert Meijer gave a personal story about the birth of supramolecular polymers, with special emphasis on their structures, way of formation, their chirality, and the dynamic nature of their bonding. The adaptivity of these polymers has become a major asset for novel applications, e.g. in the direction for the sustainable use of polymer-based plastics, but also in biomedicine and electronics as well as self-healing materials. The lessons learned in the past years include aspects that forecast a bright future for the use of supramolecular interactions in polymer materials in general and for supramolecular polymers in particular. In order to give full tribute to Staudinger in the year celebrating 100 years of macromolecules, it is shown that many of the concepts of macromolecular polymers apply to their supramolecular counterparts, with only one important difference with fascinating consequences: the dynamic nature of the bonds that form supramolecular polymers. 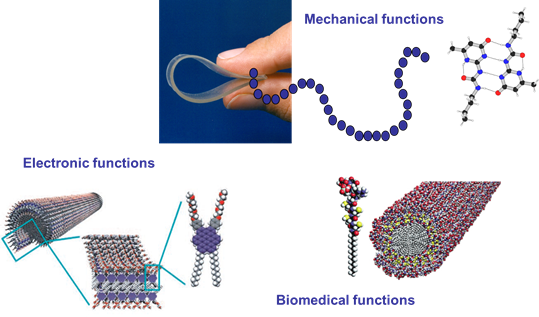 Our group conducts research in various fields associated to supramolecular polymers, materials and systems. We are convinced that exploring novel applications such as in life-science and materials science is as exciting and important as addressing fundamental questions to a molecular understanding to push the boundaries of supramolecular science.

Fundamentals of Supramolecular Polymers and Beyond